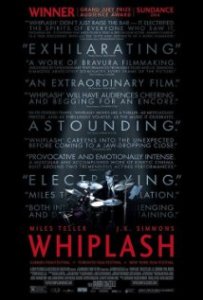 J.K.Simmons as jazz teacher Fletcher who focuses on a drummer Andrew (Miles Teller) and sadistically torments him into greater achievement.  In doing this Andrew rejects his girlfriend and nearly kills himself in an accident.  Fletcher has caused tragedy for other students and is subject to disciplinary proceedings.  Will Andrew prove himself in the big concert?

J.K.Simmons plays a role reminiscent of the bullying officer in Full Metal Jacket.  His head is all whipcord muscles bulging at the moment of his snake attacks.  This is the opposite of the Blackboard Jungle since in this film it’s the teacher who terrorizes, not the student.  Fletcher’s insults are hilariously colourful as he verbally attacks anything in range.  He indicts Andrew’s parents as losers as he gets nastily personal.  Fletcher’s defence is that he must tease out genius to save the dying art form of jazz.  Charlie Bird Parker’s humiliation and eventual triumph are supposed to make him a role model.  Whiplash makes me feel like one of the uninitiated, I’ve never been able to enthuse about jazz, seems more like music from the head rather than the heart.  This is no 80s feel good dance class for a Patrick Swayze clone, the drummer smashes his fists into blood.  He suffers for his art and and makes sure everyone else suffers as well.  He is prepared to sacrifice happiness and so his girlfriend quite rightly dumps him as the drearily obsessive perfectionist that he is.  All that pain, work, and humiliation and the status of a drummer is still not great!   Apart from his father and girlfriend, nobody comes out of this well.  His fellow musicians are neurotic perfectionists ready to back stab each other.  Whiplash cleverly leaves us wondering whether taking sadistic pains really does lead to greatness or whether it’s just a weaker will succumbing to a stronger one.  This strikes a cord in the inherent puritanism of our work ethic, the snobbery of the superiority of very painful effort.  As cinema audiences we’ve become inured to cartoonish violence and nastiness, this approach to every day professional sadism gives us the thrill of recognition.  There is vicarious entertainment in another’s humiliation, right?

Posted by jkinsleyfilm on February 4, 2015 in At the cinema, Film Reviews, Uncategorized

Set in Kansas in 2074, it stars Gordon Levitt as a “looper”, Joe, whose job is to shoot those fallen foul of the mob.  The victims are sent into the future from 2044 and once the deed is done the killer is rewarded with gold or silver ingots strapped to the victims back.  The gang boss is Jeff Bridges.  The fate of all loopers is to be killed 30 years in the future and this closes the loop.  They are shot with a ‘blunderbuss’.  Joe meets his future self, played by Bruce Willis, but he cannot kill him.  Willis pursues a child who will become a real danger “The Rainmaker” (same idea in Terminator).  The child is looked after by Emily Blunt on her farm.  Can Willis do the job?

I sometimes attempt to write science stories but I wouldn’t touch time travel with radiation gloves through a screen!  Time travel works as a comedy (Back to the Future) or as comic book fun (Time Machine or Terminator) but not when it takes itself seriously as in this film.  I always find it pretty bankrupt as a plot device and the notion of time travel seems scientifically and philosophically preposterous.  Looper gets perilously close to cod philosophy about time travel.  Looper also relies on the usual dosage of gratuitous violence, which I have mentioned in a few other offending films.  Dr Johnson said that bestial behaviour is an escape from the pain of being human, mainstream American films certainly do a lot of escaping (like Lawless and a lot of other films). Like Dorothy in Oz, Joe hopes to escape from Kansas and learns French so he can live in Paris but Jeff Bridges from the future advises him to learn Mandarin (a pretty safe prediction).  The street scenes are like in Soylent Green, people are victims of casual brutality.

The sequence on Emily Blunt’s Kansas farm is the longest in the film.  Her farm is surrounded by fields of maize and it reminds me of Cary Grant chased by a crop duster in North by Northwest or aliens in Mel Gibson’s Signs or a lot of Stephen King films.  No good can come of being in a maize field and sure enough Joe is in danger here when he tries to save the “Rainmaker” kid from Bruce Willis as his future self.  The  film lingers a lot on this farm where Emily Blunt plays the obligatorily feisty loner.  There is a sort of love story between Blunt and Joe.  Here we are supposed to think of the nature of love and belonging and identity but it all looks like a pilot for a TV supernatural series.  The kid can levitate people and things so it looks like Omen has got tangled up with some would-be arty film about life on a future farm.  As with a lot of sci-fi films deflecting attention from a possibly tight budget, there is a recurrent gimmicky fetish so in this film people can telekinetically manipulate objects and there are Batman type aerocrafts.  Looper has been praised by critics but I found it shallow and derivative.

Posted by jkinsleyfilm on October 3, 2012 in Uncategorized

Based on Tolstoy’s novel about Anna Karenina, the wife who took a lover (Count Vronsky played by Aaron Taylor Johnston) and the scandal it caused.  Jude Law plays the cuckolded husband Alexei Karenin.  There are social occasions like dance halls and horse races and journeys to and from country villas.  Domhnall Gleeson plays Levin, a precursor of the socialist revolutionaries into peasant mysticism.  His brother is an anti capitalist and forerunner of the Bolsheviks.  There is another love affair between Levin and Kitty.  Anna’s affair ends tragically of course, caught between marriage and love.

I have not read the book and sometimes I wonder if we should only read a book in its own language, reading it in English can be like looking at the back of a tapestry.  The film has theatrical settings interspersed with real outdoor scenes.  I tend to find this distracting, why not make it completely stylized or completely realistic?  When someone opens a stylized door I wonder ‘what next ?’, and this diverts attention from the character.  The assignment of reality or theatrical stylization to events seem arbitrary.  Why is a horse race indoors and the slums of Moscow attached to the fancifulness of a theatre?  When the dancers freeze in their movements, I felt I was watching an advert for perfume or chocolate.  In spite of this I was absorbed by Keira Knightly’s performance as Anna.  When she is ostracized as the ‘adulterous’ woman in the theatre her panic through the accusing isolating stares is well done.  This is the one scene where the theatrical setting really works (after all it does take place in a concert hall).  The artificiality of all the high class customs suddenly closes in nightmarishly.  This is all of course a familiar story of the 19th century, from Madame Bovary to the doomed lovers in the film Elvira Madigan.  In costume dramas on this subject we expect from our heroine either defiance or submissive reconciliation, but Knightly steers between these, her emotions coming at you from a sudden angle.  She has been ctiticized for having only a couple of expressions, so what if each expression hints of different emotional outpourings.  She can be sociable and then prickly as when, in the way of the exasperated Ibsen wife, she gets angry at her obtuse husband’s bone clicking habit.

The cuckolded husband is played by Jude Law and here he no longer looks glamorous as in other films, he looks sadly ordinary.  Law plays the ‘wronged’ husband well and his self pitying sense of ‘betrayal’ only makes Anna all the more sympathetic.  Law conveys well the vindictiveness that can hide behind humanitarian rhetoric.  As for Vronsky, he’s a lightweight.  The actor looks like Eric Idle (from Monty Python) in fancy dress.  He is vain and self regarding who doesn’t or can’t help Anna when social stigmatism sticks. Domhnall Gleeson is suitably tortured as the idealist in love with ideals and a woman.  In contrast to the theatricality, we see him haymaking with the peasants.  I would have preferred a bigger budget journey round Russia but Knightly is absorbing.

Posted by jkinsleyfilm on September 27, 2012 in Uncategorized

Stars Tom Hardy and Shia LaBeouf as the Bondurass family in 1931 Prohibition era Virginia, and their conflict with Guy Pearce (the federal agent Charlie Rakes) who is out to close their illegal stills.  Jessica Chastain and Mia Wasikowska play their girlfriend and wife.  The police are reluctant locals recruited into Guy Pearce’s war.  It ends in a shoot out.

This is very familiar stuff.  We get the honky tonk soundtrack lovingly ‘choreographing’ the scenes of predictable violence.  The film is a celebration of brutality and ‘primitive’ ways of living.  Despite the time and place, it’s effectively a western with a wearisomely familiar reverence for any excuse for bloodshed.  Guy Pearce plays Charlie Rakes, a Federal Agent, he is a dandified sadist straight out of Nazi central casting.  He will get his comeuppance, and of course we are meant to feel that he will deserve his bad end.

From the 30s to the 60s we had repressive cinematic codes forbidding the depicting of sex, swear words, and horrifying violence.  In the few decades since the lifting of the code we get film making its claim for gritty, earthy reality by throwing in buckets of blood, Nazi style sadism, and lots of tediously limited vocabulary punctuated with wearisome swearing.  Sex is also obligatory, as if only the late 20th century had discovered it.  Many films wallow in this, then we get the convenient excuse of it’s all being artistically ‘choreographed’ (though I fail to see what resemblance there is between dance and gratuitous violence).  Admittedly the old censorships sanitized reality quite preposterously, but now we have gone to the other extreme and it’s all so solemnly presented rather like a caught out criminal giving would be intelligent excuses for vile behaviour (the more sincerely insisted upon the more acceptable).  This might work for Mel Gibson because he adds the original touch of characters speaking in a language different from English, but so many films seek significance in violence.  We get sadism galore in this film.

Prohibition era films usually happen in Al Capone territory.  We also get the anthropological curiosity of the local church and its Amish look-a-likes with their highly charged gospel songs.  We also get that curious prolepsis into violence as depicted in Bonnie and Clyde, illiterate hillbillydom is always destined to end in bloodshed as if sanctioned by the very ignorance and illiteracy of the characters..

Posted by jkinsleyfilm on September 27, 2012 in Uncategorized